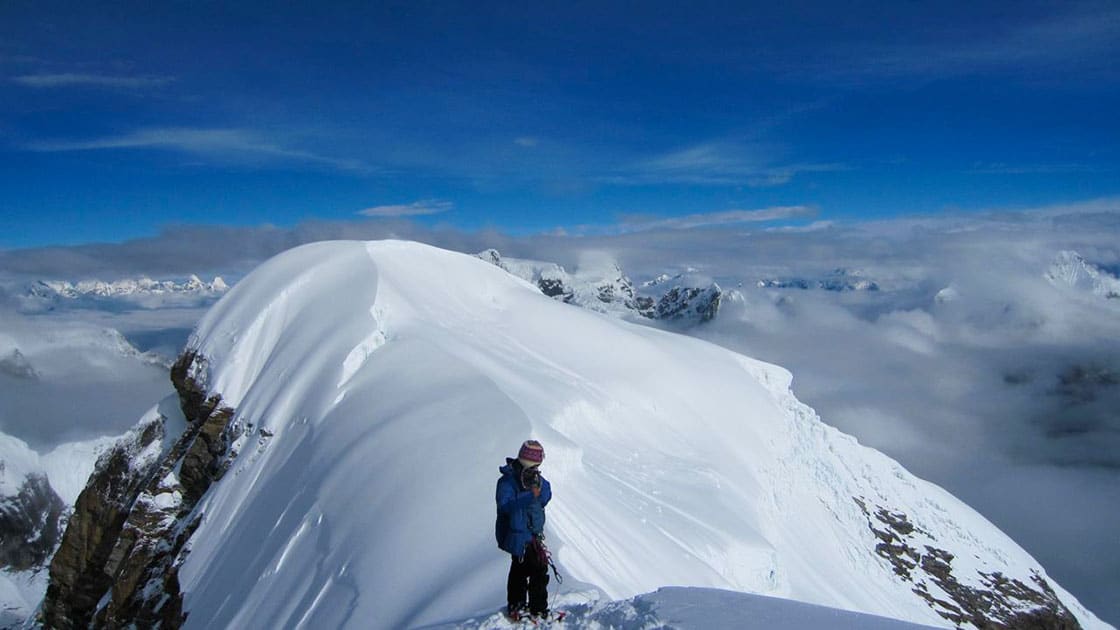 Mera Peak (6476m) is one of the most preferred destinations for peak climbing in Nepal. Not only this, according to the Nepal Mountaineering Association (NMA), it is also the highest permitted trekking peak in Nepal. The Mera Peak climbing package offers you magnificent views of the mountains like Mt. Everest, 8848m, Mt. Lhotse, 8516m, Mt. Cho Oyu, 8201m, Mt. Makalu, 8463m, and Mt. Kanchenjunga, 8586m. Mera Peak climbing is preferred by trekkers all around the world as it offers an excellent mountaineering adventure with spectacular views. The Mera peak climbing trekking route takes you through remote and isolated Hinku valley that is enclosed between giant mountains around the South East of the Everest region on the far corners. This trekking in the Mid-Eastern Himalaya around the Everest region is considered to be one of the least technical and straightforward trekking destinations in Nepal.

Your journey to climbing Mera Peak Nepal starts with a short flight from Kathmandu to Lukla. Lukla airport is one of the most dangerous airports in the world. To summarize, the route to climbing Mera Peak Nepal leads towards the hidden Hinku Valley that will take you to the Mera Peak base camp. The Mera Peak trekking route, as mentioned earlier, starts with a flight from Kathmandu to Lukla. After landing at the Lukla airport, the trek will lead towards Chutanga. This is one of the most remote and isolated areas in this trekking route. We will be staying overnight at Chutanga. On the next day of the Mera Peak climbing trek, we will head towards Thuli-Kharka passing by Zatra La Pass (4,610m).

Now, finally, the trek will move towards Mera Base Camp from Khare. On this day, you’ll take an overnight stay at High Camp and climb the summit of Mera Peak on the next day. To climb the Mera Peak, you will wake up early in the morning (around 2 am to 3 am) & ascend to the top of Mera Peak, which will take you around 4 to 6 hours. Reaching the top is worthwhile & once in a lifetime experience.

After successfully submitting to the top of Mera Peak trek, we will take the same route to return to the Lukla airport.

The best season for Mera Peak Climbing in Nepal is from March to May (Spring) and from September to November (Autumn). These seasons are also best for all kinds of trekking in Nepal. However, winter is also a great time to climb if you are well prepared for the cold weather. In the crisp and cold month of December, the views of the mountains are crystal clear and there are fewer tourists around. The duration of the Mera Peak Trip can be lengthened or shortened according to your preference. Annapurna Foothills Treks and Expeditions will arrange every detail of your Mera Peak Expedition; lodge accommodation, food, as well as all the necessary climbing and camping equipment required during the climb. 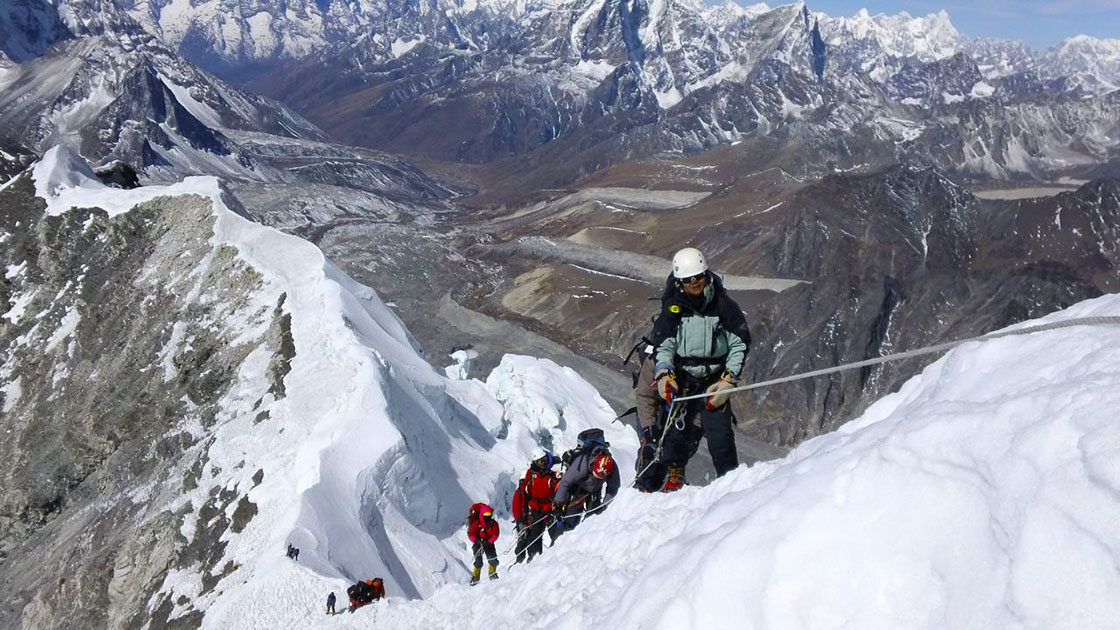 Island peak climbing package in Nepal starts with a flight to Lukla from Kathmandu. From Lukla, we accompany the Dudh Koshi river valley and reach the Sherpa town of Namche Bazzar. Namche Bazar is also a point for acclimatization. Then the trek will move towards Tyangobche Village, Tyangobche offers one of the finest scenery of Everest as well as many other peaks like Cho Oyu and many different mountains and ancient Tyangobche monastery.

Upon reaching Dingboche, we begin the arrangement for our Island peak climbing expedition. Even though the peak can be ascent in one day, it is recommended to spend one night at the base camp for adjustment and finally attempt the Island summit from the Base Camp.

The Island Peak Climbing in Nepal can be done any time of the year except during the monsoon, i.e, mid of June to end of August. The best and most recommended time of the year for Island Peak Climbing is during spring (March to early June) and autumn (September to November). However, if you are new to mountaineering or don’t have much experience, you should consider the spring season.  Also, the weather during autumn tends to be clear, so considered as the best season to scale the Island Peak.  The temperatures during autumn are moderate; favorable for trekking and mountaineering. 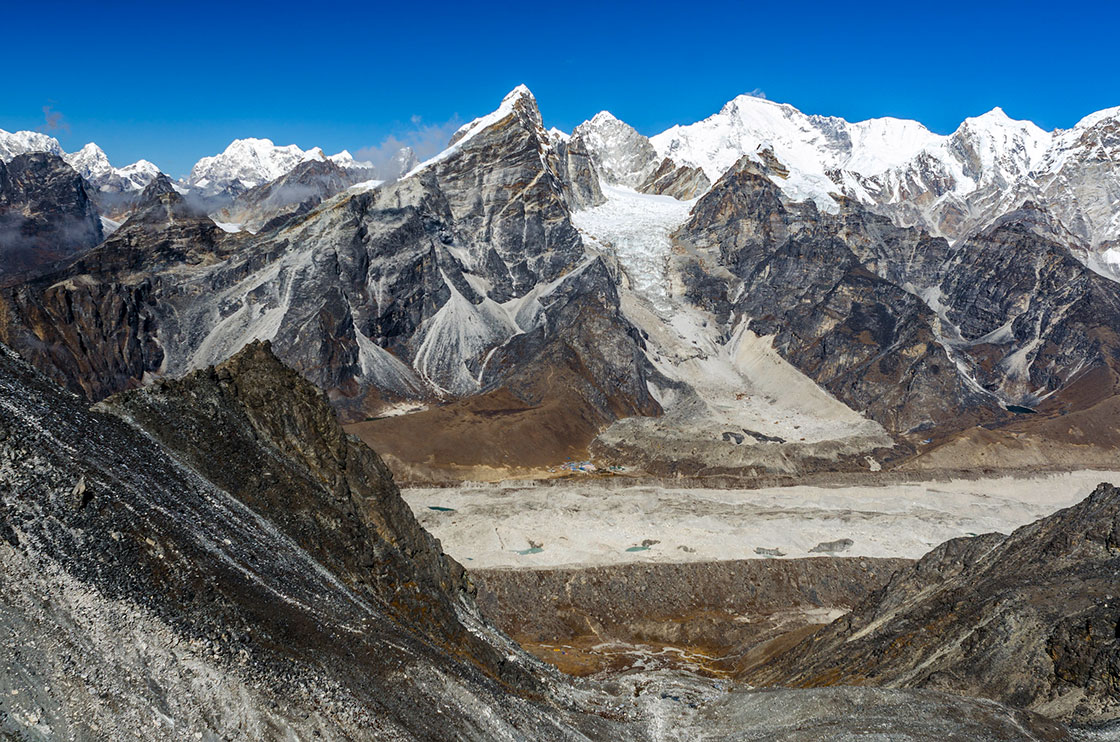 The Lobuche Peak climbing in Nepal is an excellent introduction to Himalayan high altitude mountaineering. But climbing this peak requires mountaineering skills. The Lobuche Peak (6,145m) located close to the Khumbu Glacier has two main peaks, i.e. Lobuche Far East and Lobuche East. For Lobuche peak climbing, we need to take the traditional Everest Trail, leaving from Lukla and heading up the impressive Khumbu Valley.  Along the trail, we will spend 3 nights acclimatizing in Namche Baazar, the Sherpa capital of the Region.  This trek will also take you to impressive monasteries and remarkable sceneries as we pass numerous seven and eight thousand meter peaks on the trail.

Lobuche Peak climbing package can be pursued at any time of the year except during the month of monsoon (June to August) other than spring (March to May) and autumn (September to November). You can get the best views of the mountains during this time of the year. These seasons are also best for all kinds of trekking in Nepal. 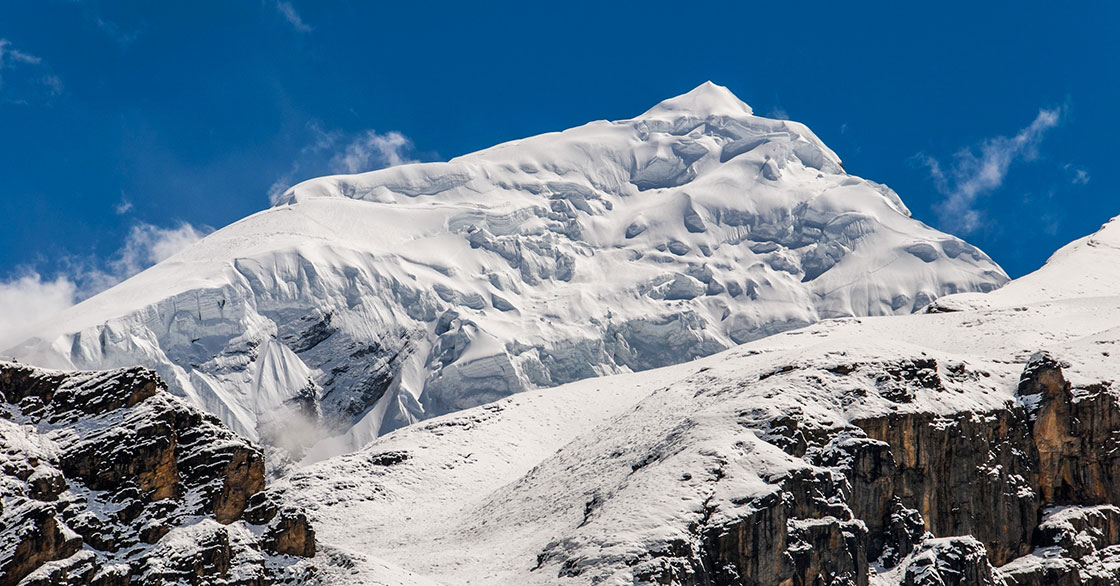 Situated in the Annapurna Region of Nepal, the Chulu Far East Peak lies at an elevation of 6149m from the sea level. As one of the best peaks in the Annapurna region, it treats you with the scenery of the mountains like Dhaulagiri, Annapurna, and many other beautiful peaks.

The trek for Chulu Far East Peak Climbing package starts with a drive from Kathmandu to Khudi. Then, the trail leads you to the Manang valley, which is one of the highest valleys in the world. Also you can combine with Nar – Valley trek too. Upon reaching the top of the Chulu Far East Peak, the trek will head towards Muktinath after passing Thorung-La pass (5416m). After paying a visit to Muktinath, the trek will head towards Jomsom to take a flight to Pokhara.

The best time of the year for Chulu Peak climbing is autumn (September to November) and spring (March to May). 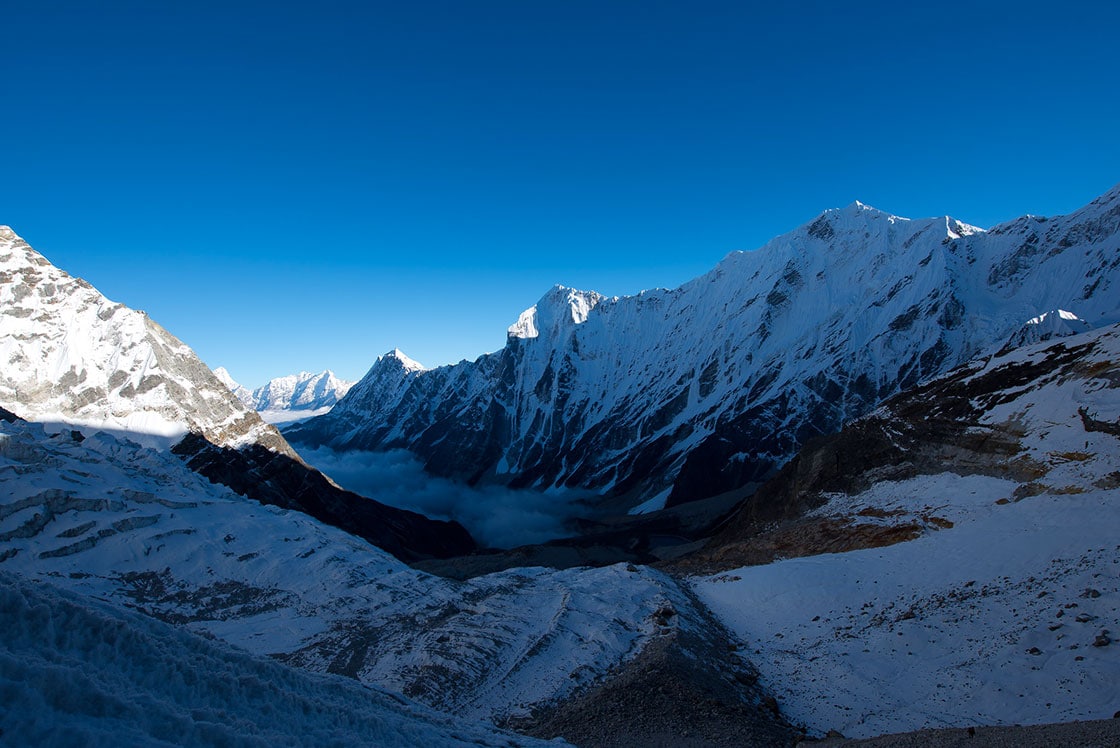 The Rolwaling Tashi Lapcha Trek introduces you to the beautiful Rolwaling valley and the Khumbu region of Nepal. With this trek, you’ll be able to encounter the challenge of crossing the high-mountain pass of Tashi Lapcha (5755m).

The Rolwaling Tashi Lapcha trek package route starts with a drive to Gonggar via Dolakha. On the way to Gonggar, you’ll get an amazing view of Mount Gaurishankar (7134m) and can also explore the Yalung Glacier and climb on the training peak of Ramdung Go (5930m). Leaving Na Gaon, we climb uphill to Tsho Rolpa Lake (4540m), the largest glacial Lake in Nepal. The trail then joins the trekking trails of the Khumbu region which is ever bustling with tourists from inside and outside the country. Then the trek heads towards the Sherpa town of Namche Bazaar via Thame and leads to Lukla, from where we take a flight back to Kathmandu.

The best time for Rolwaling Tashi Lapcha Trek is from March to May and in mid-September. The weather during this time of the year makes your trek even more amazing.

Yala Peak climbing is a wonderful peak climbing in the Langtang region. The Yala peak is situated closer to the Tibetan border following the ridge of high mountains. This trek is combined with the beautiful Langtang Valley trekking. On the route to the Yala Peak Climbing, you’ll get wonderful views of Himalayan ranges of the Manaslu range, Langtang Lirung, Dorje Lakpa, Naya Kang, Ganesh Himal range, Shishapangma and Gangchempo (6388m).

Yala Peak Climbing is a fantastic option for beginner mountaineers. The trek for Yala Peak climbing package starts with a 5-hour drive from Kathmandu to Syabrubesi and continues with five days hiking up the beautiful Langtang Valley to Kyanjin Gompa at 3800m. Before moving on to the Yala Peak, we spend three days acclimatizing at Kyanjin Gompa, which is situated below Langtang Lirung (7246m). After summiting the Yala Peak, we return to Dhunche via Syabrubesi and drive to Kathmandu.

Autumn and Spring seasons are considered to be the best for Yala Peak Climbing. Autumn falls in September, October, and November whereas Spring falls in the month of March, April, and May. The weather and temperature of the Langtang region during these seasons are very favorable for trekking. These seasons are also best for all kinds of trekking in Nepal.

These are some of the best peaks for peak climbing in Nepal. Climbing long peaks is challenging. Thus, it requires medium technical skills and experience for finishing Peak climbing. Also, it provides you the experience and basic skills for performing extreme expeditions. But, we at Himalayan Trails Trekking work to make climbing long peaks easier and comfortable than ever before. Himalayan Trails Trekking is owned by a professional team. A well established, competitively priced and reliable company that has been operating for the last five years. During this period we have organized Trekking, Tours, Bird watching, Peak Climbing, Tenzing Hillary Everest Marathon and Mt. Everest Expedition in Spring 2017, for some of the most legendary qualities in Himalayan in Nepal, Tibet and Bhutan.

We are an official member of TAAN (trekking agents association of Nepal), NATTA (Nepal Association of Travel and Tour Agents). And Nepal tourism Board and officially registered in the Ministry of Tourism and Civil association, the government of Nepal. You can contact us for any kind of peak climbing in Nepal.